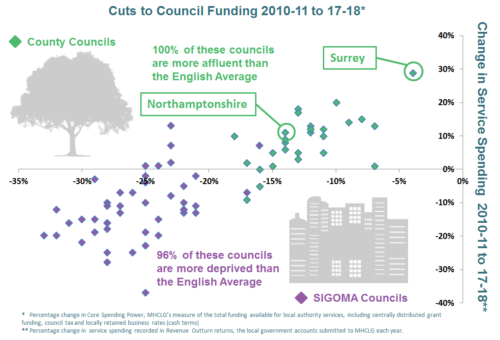 Torture the data and it will confess to anything; so said British Economist Ronald Coase in 1981.

While we must rely on data as part of the fair funding review of course, we must also be vigilant to the ways in which it can be selectively presented.

The County APPG and CCN recently claimed the least socially mobile areas in England are counties. To reach this conclusion, they commissioned think-tank Localis to produce “a new social mobility index”. This was somewhat surprising, given that a Social Mobility Index is already produced by the Social Mobility Commission.

The Commission’s data looks at 16 key indicators, while the counties’ index considers only 9. The counties also omit things like median weekly salary, focusing instead on job density – factors which may alter the urban-rural split.

They use this data to claim eight of the ten least socially mobile areas in England are counties. If their data resembles the official index, however, this is misleading. While Commission’s index does show that eight of the ten are shire areas, these are all districts and not necessarily representative of the counties they fall within.

Delving deeper, the Social Mobility Commission’s index shows that only 22% of districts within county areas are classified as cold spots and, while individual counties represent 29% of the total cold spots, metropolitan and unitary authorities represent 31%. And 19% are SIGOMA councils.

In terms of hot spots, which the counties analysis fails to mention, while London authorities do dominate with 46% of the total, not all urban areas have the same advantages. SIGOMA authorities only represent 2%, while counties account for 25%.

The counties focus too on the “additional costs of delivering rural services”. Their report however provides no evidence that there are any. In fact, an independent study undertaken by LG Futures, commissioned by MHCLG and even referenced in one of the fair funding review technical consultations, showed the opposite. Despite this, the claim that rural areas face higher costs has gained undue momentum.

Finally, the counties draw attention to the perceived unfairness of current funding. We have no reason to doubt the figures they quote, but that they choose not to dwell on why this might be is telling. The reason counties receive less central funding is that they have the strongest council tax bases of any authority type, raising, on average, around 40% more per head than SIGOMA authorities.

High tax bases have also enabled most counties to insulate themselves against austerity, facing among the lowest cuts to core spending power and even increasing spend on services while deep cuts were forced on others.

No one is arguing that small pockets of deprivation don’t exist within counties or that no counties are deprived. They do, some are, and this should be accounted for.

But pockets of deprivation in counties must not distract attention from the pervasive deprivation that grips many urban areas. A focus on central funding must not distract from debate about the total resources available locally. A repeated mantra of ‘greater costs in rural areas’ don’t make it so. This must not blind us to the fact that there is no independent evidence to underpin it.

We are all entitled to argue for our fair share. But if it is to succeed, the fair funding review must rise above the selective soundbites and loudest lobbyists to consider all of the evidence and, crucially, nothing but the evidence.